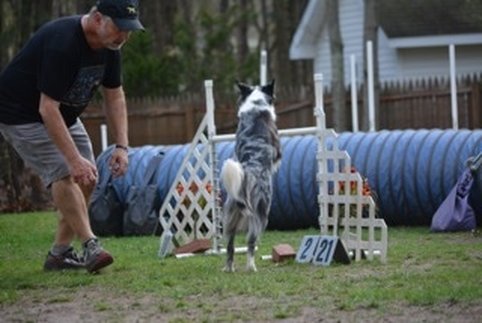 Over the course of 10 years as an agility instructor, Jeff has worked with a wide range of dog and handler teams from beginners though accomplished international competitors. He recognizes that each team learns at their own unique rate regardless of the class level. Jeff's cornerstone for teaching is detail and consistency resulting in teams with better confidence and understanding. Often pushing students beyond their comfort zone. This helps expand their limits and redefine their own personal goals. Jeff is able to improve team communication while reinforcing speed - all while centering their experience on fun and laughter. From teams just entering the Excellent or Masters classes to those focusing on improving their international handling abilities, Jeff skillfully uses a myriad of tools learned from top national and international instructors to help teams achieve their personal best.
His own dogs include the historic 5-time AKC Invitational MACH and USDAA Master Agility Dog "Tipo" (Spanish Water Dog) and MACH "Snafu," MAD (Border Collie), a semi-finalist at the 2015 USDAA Cynosport World Games. Both dogs have had many impressive rankings and wins and are multiple AKC Nationals qualifiers. His newest competitive partner is the promising young Border Collie "Fray." 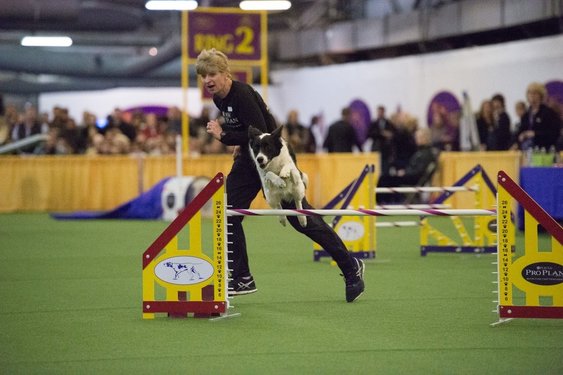 Jeanie began her agility journey at Kruisin Kanines nearly 16 years ago with a Rhodesian Ridgeback and a rescued Pit Bull mix. Since then Jeanie has gone on to be an instructor for a variety of agility classes. She has a wealth of knowledge she has learned over the years from national and international instructors. One of her interests is the early shaping of subtle behaviors so they mature into fast dependable habits. She is also interested in fast and reliable obstacle performances and international handling. And while her calm demeanor might belie her competitive spirit, she is a master at creating drive while maintaining focus. A self-described "student of the game," her own students welcome her creativity and dedication to excellence that helps them succeed in the sport.
Jeanie has a soft spot for rescues. She has worked with and through a variety of rescue behaviors. She works to modify and reshape them in an effort to achieve confidence, enthusiasm and ultimately, successful teams.
Jeanie's current competition dogs include MACH4 ADCH "River," a rescued Border Collie. River has qualified for AKC Nationals annuals since the age of two. "River" and Jeanie made the Finals at AKC Nationals in 2014 and placed an impressive 5th in the 24" class. Her young Border Collie "WiFi" is now embarking on his agility career and shows tremendous promise.* 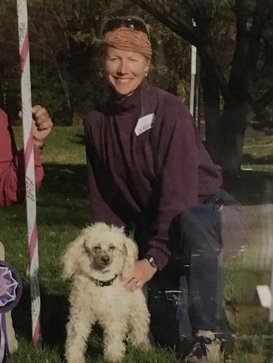 With more than 38 years as a Health & Physical Education teacher (primarily high school), Linda has an established history of success in teaching individual and group sports while developing a wide range of casual and goal-minded athletes.  When the agility bug bit her in 1999, she found a way to marry her enthusiasm for sports with her love for dogs.  Linda's background in teaching combined with her understanding, enthusiasm and thoughtfulness (not to mention success!) in agility, makes for students who progress with confidence, heart and humor.
As an agility trainer and competitor, her partners have varied greatly and include a German Shepherd, Sheltie, rescued Miniature Poodle and Border Collies.  Her multiple MACH accomplishments are the result of dedication, the understanding that not all dogs (or people!) learn the same way or in the same amount of time, determination and a ton of fun!
Linda's current competition dogs include two young Border Collies; Wynne and Troo; both of which are not only well known for their speed and love of the game, but for their versatility - they work on Linda and husband Rob's farm and are proficient in nosework and herding. 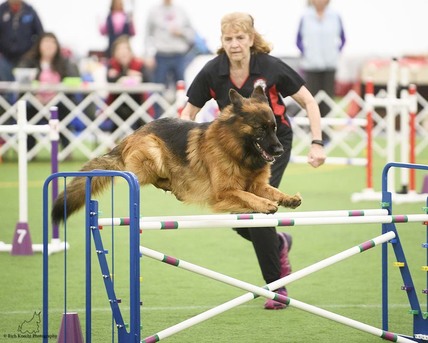 Konnie McCaffree
​With a history in performance German Shepherd Dogs that goes back decades, Konnie has been involved in dog agility since its infancy in the United States. She is a founding member of Kruisin' Kanines. Konnie has been an agility instructor for more than 15 years. She loves being a part of the journey her students travel. Since she has a strong interest in course analysis, she is an ardent believer in frequent positive reinforcers which have a profound effect on speed, accuracy and confidence. Although she works to increase the challenges teams face with knowledge and self-assurance, she always remains centered on the positive relationship teams must have to enjoyably and enthusiastically advance their careers. Konnie's interests in dog sports are vast and go well beyond agility. Her interests include K9 Nosework, obedience, tracking and Schutzhund (IPO) where she also has advanced titles. Konnie's agility titles bridge such venues as USDAA, NADAC, AKC and UKC. Her own agility dogs include the notable MACH12 "Iko" and MACH6 ADCH Y'Caeli. They both have topped the German Shepherd Dog annual rankings subsequently earning them coveted AKC Invitational tickets for a combined 6 years. Her newest training partner is German Shepherd youngster, "Karizma." 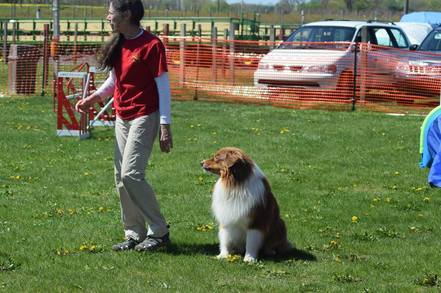 Rosemary McQuate
​
Bringing a great deal of knowledge from her 12 years in agility, Rosemary's interests include the deconstruction of handling challenges into smaller components designed for success. This approach as an instructor not only provides students with the best possible avenue for trouble shooting, it helps students develop their own problem solving skills - an attribute students covet as they embark on their own agility journey. With a focus on positional cues, proper start lines procedures and handling techniques, students find the passionate support and guidance they need as they progress to sequencing and beyond. Rosemary pays particular attention to problem solving (or rather strengthening those skills necessary to avoid problems), efficient obstacle performances and has a keen eye for details. She is equally focused on developing and maintaining strong relationships between the dog and handler team in an effort to optimize enthusiastic performances. Rosemary's current agility dogs include MACH4 "Dai," a top Welsh Springer Spaniel that has qualified for the AKC Invitationals for the past 5 years, Australian Shepherd MACH "Belle," rescued Border Collie MACH "Jakie" and youngster "Joey," an Australian Shepherd already competing in the AKC Masters classes. 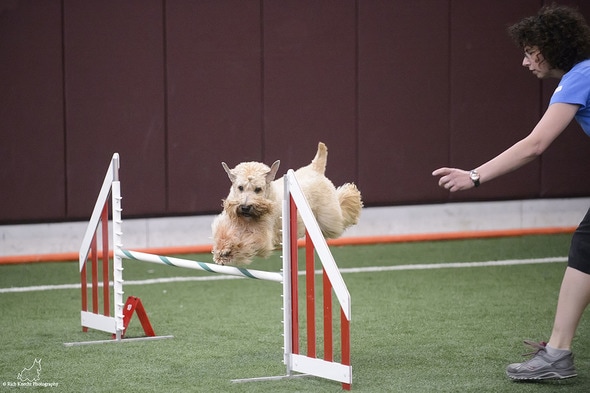 Dina has a unique gift for teaching the isolated behaviors which all of agility is based. Because of this she is an excellent Foundations instructor. Dina's classes focus on Beginners and Foundations level dogs and/or handlers. Her classes cover an introduction to equipment plus concepts and behaviors in incremental steps. Her approach allows teams to build a solid base. It also creates an appetite for learning and success. Positive and meaningful experiences in the Beginner and Foundation classes are critical in setting any team on an enthusiastic path. Dina strives to instill confidence in her students as they learn the tools needed to perform the necessary fundamentals. Along the way, they also develop appropriate habits. Dina's many years of teaching these behaviors helps the handler understand the aspects of positive reinforcement and behavior generalization, all while having fun!
​Dina and her Soft-Coated Wheaten Terriers have many accomplishments. Besides agility, her dogs compete in barn hunt and are accomplished "actors". They appeared in the Emmy award-winning movie "The Normal Heart" staring Julia Roberts and Mark Ruffalo. Her agility partners include MACH3 PACH "Boone", a 5-time AKC Invitational qualifier, multiple AKC Nationals qualifier and number #1 ranked SCWT 2015 & 2016 running in the Preferred classes as well as "Raphael", OA, OAJ, RATI, RATN. Dina’s newest partner is SCWT "Vida" MX MXJ SCN, SBN, RATN,CGC, TKA/ RATI, NW1, ETD.  Placing 4th in her first NW1 with a 3rd placement in Exteriors. Vida was invited to the AKC Eukanuba Invitationals 2017 and ranked #4 SCWT in agility.  Vida also has titles in Barn Hunt and AKC Scent Work with placements as well as Tricks Titles with AKC and DMWYD. 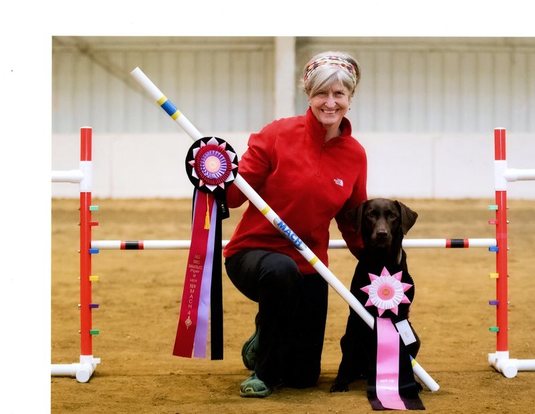 When Kim Secter first ventured into obedience and agility training 20 years ago, she had no idea that it would bring her national rankings, countless awards and a passion for positive teamwork. Her own training and handling style has developed over years of instruction from some of the world's best trainers and is a unique blend incorporating solid foundations, positive communications, motion-based handling, and expert course analysis. Her upbeat classes focus on developing a team's unique partnership, while promoting confidence and joy - all trademarks of great teams worldwide. A popular instructor, she encourages students to develop skillful approaches to training, emphasizing strong communications while encouraging speed. Since first starting to teach agility fifteen years ago, Kim has realized the importance of setting and ultimately reaching personal goals and encourages her students to do the same.
​Nationally known for her competitive Labrador Retrievers, Kim's own dogs have obtained Top 25 rankings over multiple years earning the coveted "Top 5" ticket in the competitive field of Labrador Retrievers twice to the AKC Invitational. A finalist at the 2016 Westminster Masters Agility Championship, Kim's other canine related passions include obedience, K9NoseWork, hunt tests and Therapy Dog work. **